A Sauce and Dip Dictionary 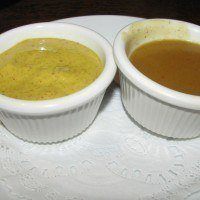 This is the start of a growing list of sauce and dip definitions. Feel free to add your own terms in the comments, and stay tuned for more sauce and dip terminology!

Aromatics – A spice or herb with a strong fragrance.

Arrowroot – A starch from the arrowroot plant that thickens sauce.

Break – When an emulsion separates.

Broth – Water used to blanch meat and/or vegetables. Could be used to create a soup or sauce, or it can be sipped on its own. See stock.

Butter – The fat separated from cow’s milk. Used in cooking and as a spread. See spread.

Caramelize – When food browns during cooking.

Chutney – An East Indian sauce or relish made from sweet and sour flavors.

Compote – Baked or stewed fruit usually served as a dessert, but can also work well as a dip or spread.

Condiment – Any spice or sauce used to add flavor to foods.

Dip – To submerge a food into a liquid so as to combine flavors.

Dressing – A liquid or semi-liquid used to coat a food or series of foods (often in a salad). Also called a sauce.

Emulsion – Two liquids that wouldn’t normally become one, do become one thanks to a third liquid (emulsifier).

Froth – Foamy top layer of a liquid as result of aeration.

Gravy – Fat and drippings (collected during meat preparation) combined with flour and other flavors.

Hollandaise – Made from egg yolks, butter, and lemon juice. This creamy sauce is typically served over eggs or meat. See mother sauces.

Marinade – A liquid and seasoning combination used to infuse flavor into meat, chicken, fish, or vegetables. You drown the chosen food in the liquid and let sit for several hours before cooking.

Mirepoix – Flavorful water created by boiling vegetables, usually celery, carrots, and onions. Often used as the start of a sauce.

Mother sauces – There are five mother sauces from which all sauces are based. They include Béchamel, Velouté, Espagnole; the two basic emulsified sauces, Hollandaise and Mayonnaise; and the oil and vinegar-based Vinaigrette.

Reduce – Boil a liquid without a lid in order to evaporate some of the liquid. A reduction results in more concentrated flavor.

Relish – Minced and pickled vegetables or fruit served as a food topping.

Ribbons – After beating a sugar and egg mixture for awhile, you can lift your spoon and watch the batter fall into bowl and notice that it looks like ribbons.

Roux – The result of melted butter (or other fat) combined with flour. The basis of many soups, gravies, and sauces.

Salsa – A combination of uncooked, chopped tomatoes, onions, peppers, and other flavors to create a spicy topping or dip.

Sauce – Usually a liquid served on top of prepared foods. A sauce sticks to food, while soup does not.

Sieve – Same as strainer. Needed for separating chunks from liquid. Sauce-makers should rely on a fine-mesh strainer.

Slurry – Corn starch and chicken stock mixture. Use your fingers to get rid of the clumps.

Spread – Literally means “to go around.” Typically a tasty semi-liquid served atop crackers or bread.

Stabilizer – An ingredient of a sauce that prevents it from separating.

Stock – Produced by boiling meat, bones, or mirepoix for a flavorful liquid that serves as a base to many sauces. Similar to broth, but it’s argued that stock has stronger flavors and more likely to be made from bones.

Syrup – Sweet liquid (usually so sweet it’s sticky) used as an ingredient or on top of foods.

Tapenade – An olive puree typically containing capers and other seasonings and served as a spread on bread or crackers.

Temper – Before adding eggs to a warm sauce, add a spoonful of the sauce to a bowl containing the eggs. Beat the mixture and then add to sauce.

Velouté – A white sauce made from stock. See mother sauces.

Vinaigrette – Oil and vinegar seasoned with mustard and other aromatics. Often eaten as a salad dressing. See mother sauces. Read more about vinaigrette.

Water bath – Some sauces don’t need direct heat and can instead be warmed using a double boiler.

Whip – Add air to a mixture by quickly stirring in a circular motion. Usually with a whisk.

8 Responses to “A Sauce and Dip Dictionary”