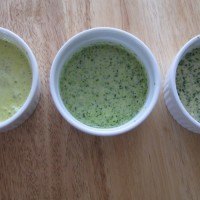 When living in New York, we ate at a place called the Chicken Festival often. You can laugh at the name if you want, but until you’ve tasted their roasted chicken magic you really don’t know what you’re missing. We found this little Peruvian restaurant on accident during a rain storm and returned almost weekly after that.

I liked a lot of things about Chicken Festival, but the biggest contributer to my obsession was the green sauce–aji sauce. When I told the owner I might want to marry her sauce, she welcomed me to the club, promptly refilled my cup of sauce, and moved on before I could inquire about her recipe; not that she’d give it to me anyway.

Since recently purchasing my fantastic food processor, I decided to take a shot at making my own aji sauce. After a bit of research, I made three variations. None of them matched the awesomeness of the Chicken Festival, but each did have its own redeeming qualities. Here are my sources of research:

1 – Learned about aji amarillos and finding ground chiles at the Savory Spice Shop in Boulder.  The aji amarillo chile (a/k/a aji escabeche or yellow chiles) comes from Peru and has a lemony flavor. It’s used in sauces, salsas, and stews. 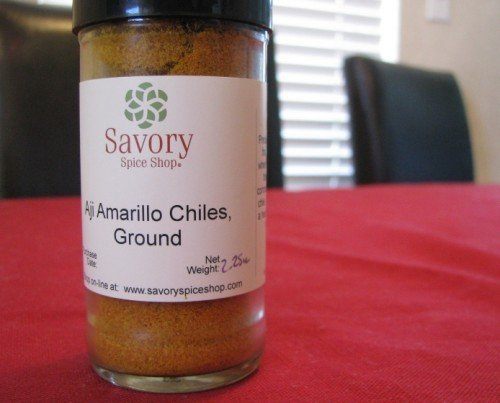 2 – Found inspiration over at Wandering Chopsticks for fulfilling an aji sauce craving.

3 – Searched high and low on the “big” recipe sites for a basic approach. I liked Serious Eats’ recipe, because it included Parmesan cheese. I NEED cheese.

4 – Then to Bon Appetit for another recipe (all very different), so that I could see another approach to making my own aji sauce.

I didn’t follow any of the recipes I found exactly, but I did get some great ideas. Below you’ll find the three different versions I tried.

Recipe for Aji Sauce (with yogurt and sour cream)

Directions: Throw the cilantro, onions, and garlic in food processor. Add olive oil, lemon juice, and aji ground chiles and continue to process.  Add yogurt and sour cream to mixture and process until you have a texture you like. 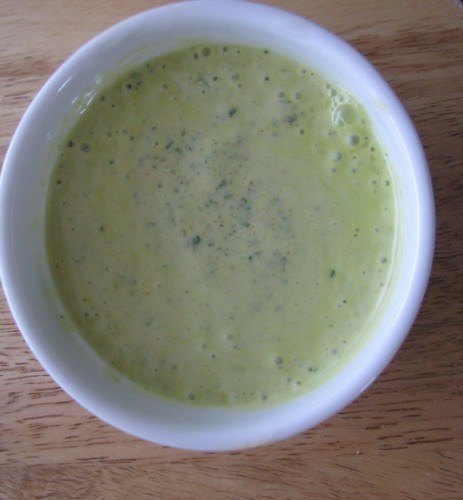 Recipe for Aji Sauce (with yogurt and iceberg lettuce)

Directions: Run cilantro, jalapeño, garlic, and iceberg lettuce through the food processor. Make aji paste by adding equal parts olive oil and ground aji amarillos. Add paste, remaining olive oil, and lemon juice to mixture and continue to process. Add remaining ingredients and process until smooth. If you want something less creamy, add a tablespoon of water (I did). 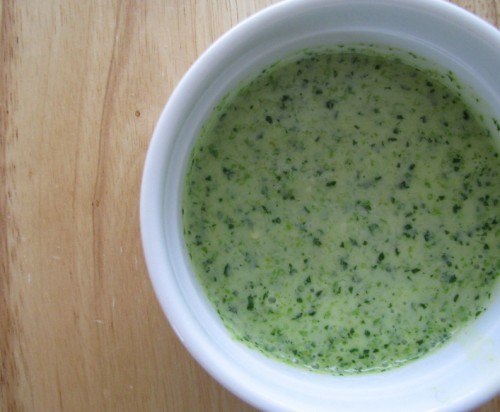 Recipe for Aji Sauce (with mayonnaise) 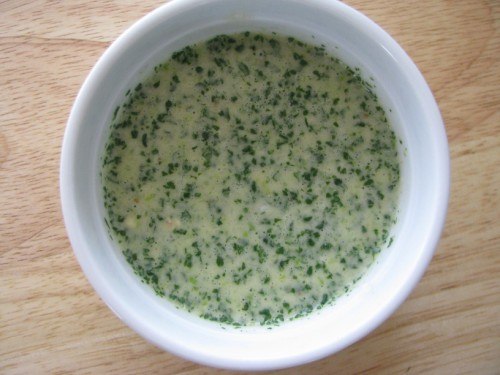 Maybe you can tell from the goofy amounts of my ingredients that I didn’t make full batches of aji sauce. I mean, how much aji sauce can two people eat on a regular weekend? So, each batch filled about one small ramekin, which would have been plenty for a meal of roasted chicken with beans and rice. As I mentioned, none of the three batches were quite what I was looking for. However, I do think that the second version was the closest. I think a few more fresh, hot peppers and less cilantro might do the trick.

It should be noted that the iceberg lettuce in version #2 gave the sauce an interesting color and a nice consistency, but I was surprised that I could taste the flavor as much as I could. Last, I recommend using lime instead of lemon — I’m not crazy about over-lemony sauces or other foods.

As mentioned, you can eat aji sauce atop chicken, rice, and beans. You could also use it to dip your bread or your French fries. I used some of the leftover aji sauce for that very purpose. 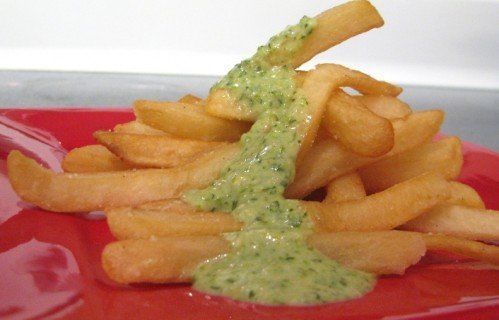 My quest for a Chicken Festival caliber aji sauce remains. Tell what you think about aji amarillo sauce and any recipes that have worked for you, too.

12 Responses to “Adventures in Aji Sauce”