In the Beginning, There Was Mother Sauce 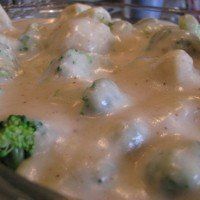 Mother sauces: The base sauces in the French culinary tradition of which all other [secondary] sauces are made; sometimes called grandes sauces, standard sauces, or classic sauces. In theory, once you learn the technique for making each of the mother sauces, future sauce making will be a breeze.

Okay, maybe not always a breeze (whatever that means anyway), but the hope is that you won’t feel so challenged by sauce and will instead LOVE to make it.

This is the second post in my series of epic posts “all about sauce.” You can read the first one here: A Sauce History. Today, I want you to dive into the world of mother sauces, so let’s get started already…

Mother Sauces in a Nutshell

A white sauce made with milk and thickened with a roux. (Yes, it’s what we used to quadruple the calorie count of the broccoli dish pictured above). A few secondary sauces of béchamel: mornay (cheese sauce), blush, mustard. 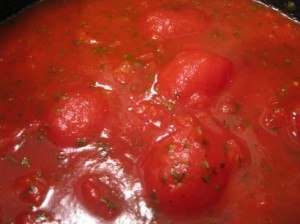 Um, yeah. This one has tomatoes in it. A few secondary sauces of tomato: cardinal, meat, provençal.

Espagnole, demi-glace, béchamel, and velouté came first. One hundred years later, tomato sauce made the cut. Then, at some point that’s not exactly clear to me, emulsified sauces came onto the scene. (Check out the sauce and dip dictionary for an explanation of terms).

Egg and fat based sauces that result thanks to our friend emulsification. A few secondary emulsified sauces: tartar sauce, green sauce, crème anglaise.

Oil and vinegar based emulsification. (Marinades and some jus fall under this category, too.) Secondary sauces of vinaigrette: Choose almost any combination of oil, vinegar, and aromatics to change up a vinaigrette.

A quality mother sauce starts with a quality stock. (Does that make stock a mother?) I’ve been told more than once not to rely on bouillon or Swanson’s stock for a sauce base (sorry, Swanson’s), and to make your own vegetable, chicken, beef, or fish sauce when you can. Personally, I can’t get excited about making a stock, because I’m squeamish around innards of any kind. The remedy?

“In my experience, they [Minor’s] have the most authentic flavor, with fewer additives and preservatives than other brands,” Chef Kerber said. “Some supermarkets carry this brand, but you may have to go to a specialty store to pick them up. Look for them in the refrigerated section.”

Great tip, Chef Kerber. Thank you for keeping me far away from those innards.

Hold on a second, I thought there were only five mother sauces?

If you’ve been counting, you’ve noticed that I’ve mentioned more than five main sauces. Welcome to the complicated world of mother sauces.

You could read three books on classic French sauces and get three different answers on what qualifies as a mother sauce. I think I spent over two hours trying to find a consistent answer without luck, so I went to my local sauce expert–Chef Matt Selby of Denver’s Vesta Dipping Grill and Steuben’s.

“Depending on how old or new school your [culinary] education is, any one of [the mother sauces mentioned] could or could not be considered a mother sauce,” Chef Selby explained. “Some would even say that béchamel, because of its use of roux, covers espagnole. There is even an argument that béchamel could be discussed in the same category as emulsified. Further more, and this gets REALLY interesting, you could say that none of the above are mother sauces in that none of them are true mothers, i.e., the product of a MOTHER preparation.

“Take for example jus, or stock…pan drippings turned into sauce. Those types of things. Mole, when prepared traditionally with chicken thighs, is a byproduct of the recipe, rather than a sauce made on its own, would be a mother sauce. I should stop right there…I can go on forever.”

He’s not kidding. We could talk about this forever.

Shut the front door. Why do the French get all the credit?

The truth of the matter is that French culinary tradition seems to get most of the attention when it comes to defining sauces and the basic techniques involved. But there are classic sauces in many other regional cuisines, especially Asian cuisines. Just look at fish sauce! An incredible number of sauces rely on fish sauce, which by definition would make it a mother sauce.

Chris Perrin of Blog Well Done agrees. “It’s equally valid to say that soy sauce, oyster sauce, etc. are Asian mother sauces, since things like soy sauce are as important to Asian cuisine as cream is to French cooking.”

Hallelujah! Given’ the East some credit.

And Now, a Recap on Sauces

This was a lot of sauce talk for one post, and the scary part is that it barely scratches the surface. Here’s a recap of what we’ve covered so far:

Other mother sauce posts worth reading…

Fall In Love With Mother Sauces

What Not To Do When You Make Sauce

12 Responses to “In the Beginning, There Was Mother Sauce”