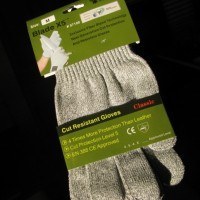 Not long ago I put my hand in a blender while making a cheese ball. My husband, Jason, felt bad for me and bought me a pair of cut resistant gloves a few days later. Jason didn’t mean to be funny, but it WAS funny.

Who puts their hand in the blender anyway?

Truth be told, the gloves wouldn’t have prevented my near finger-loss, but they will be useful in the kitchen. Here’s my review of G & F’s Blade X5 Cut Resistant Gloves.

Go small if you want to cover both hands 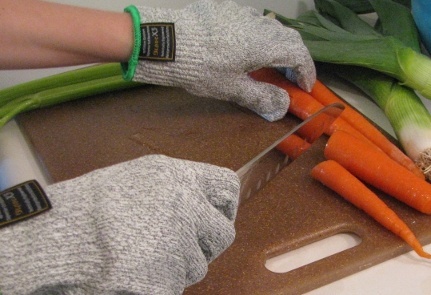 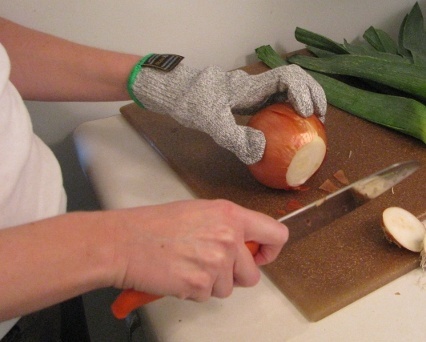 G & F’s Blade X5 Cut Resistant Gloves come in a set, but it seems pointless to have a glove on the cutting hand. It’s very strange when you can’t feel the knife, which might be why some cut resistant gloves are not sold in pairs–only singles. But not G & F’s!

I read on Amazon that other customers appreciated having two gloves. They prefer it that way, so they can protect their second hand against cuts and keep comfortable when handling warm and cold foods.

Maybe a smaller pair of gloves would convince me to wear that second glove. I think you can tell from these pics that the medium size is just too big for my fingers.

You’re supposed to have your mise en place and your focus on one cutting task at a time…blah blah blah. I know that the experts tell you to stay organized in the kitchen, but in my kitchen I’m doing many things at once.

What kind of Pandora station am I listening to?

I need a refill.

Was that my phone?

These are all thoughts that go through my mind when I’m supposed to be focused on the chopping or slicing at hand. Maybe that’s why I’m accident prone…

The point here is that my gloves come off and on, they make their way to the sink and under water, and I sweat, so the gloves are wet inside and out. I gotta tell you, these gloves feel weird once they are wet.  It’s not a deal breaker, but if you are a spaz like me and you are sensitive to the feel of wet fabric, then you might not like these after a few minutes.

My, what dirty gloves I have!

I only cut veggies for a vegetable stock and still the finger tips on these gloves turned brown quick. After only one use! A tumble in the washing machine didn’t do much to remove the stains either. But then again, who cares? The gloves cost $15.99, and it’s not like I’ll be wearing them to the Grammy’s. 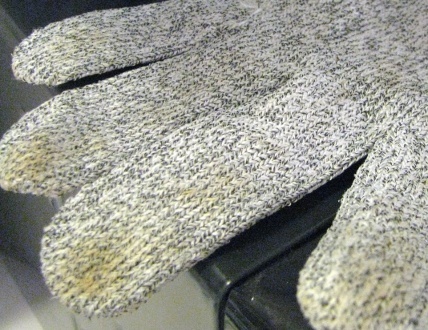 From what I’ve read, anti-cut gloves (also called butcher’s gloves) are best used for de-boning and basic slicing, since no gloves are completely cut proof. However, I won’t use these for cutting ordinary onions and carrots. I think it’s overkill. Here’s what I recommend you use the gloves for:

What else do you recommend I use my anti-cut kitchen gloves for?

Leave a Reply to Paul