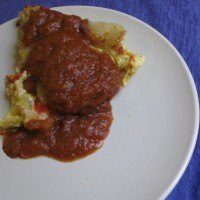 I know Mexico and Spain have different cuisines, but when I made a Spanish tortilla I was at a loss for complementing the dish with a sauce. Every time I’ve eaten Spanish tortilla it was sans sauce, so I could’ve have just eaten it solo, but c’mon. Who do you think you’re talking to?

I am the Saucy Dipper.

My friend over over at My Morning Chocolate suggested romesco sauce, which sounded great. But I’m still without a food processor (at least until we get back to Colorado), so I’m relying on my hand blender and I don’t trust it to chop and blend the almonds the way I’d like. Then I thought about a verde or a mojos, but again, I just didn’t think my little blender could cut it. (Sorry for the pun. Well, not that sorry.)

That’s when I decided on making an enchilada sauce. One – I knew it would taste fantab (short for fantabulous, in case you don’t know).  Two – we eat Mexican food every week at our place, so I knew we’d have more than one meal set aside for the sauce.

Deciding on the enchilada sauce recipe was easy. I chose one from Lynn’s Kitchen Adventure.

How to Make Enchilada Sauce

Directions: Combine all ingredients and puree. Heat in saucepan over medium heat until heated through, about 5 minutes.

The only change I made was to add twice as much spice. I say go spicy or go home. It really turned out wonderfully. 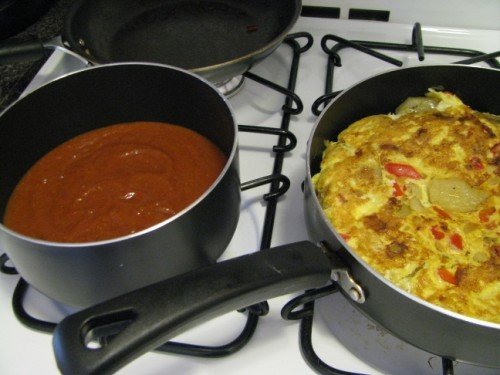 As for the Spanish tortilla recipe, I made one up on my after reading several other recipes.

Directions for Spanish Tortilla: Pour oil in skillet and place one potato slice in pan over medium heat. Once potato starts bubbling around the edge, add the remainder of the potatoes and turn heat down to medium low. Two minutes later, add the onion and red pepper. Add salt, pepper, and parsley. Mix eggs in separate bowl. Once potatoes are tender, drain in sieve, but collect oil in a bowl. Wipe the pan clean with a paper towel. Place two tablespoons of oil in the pan and return the potatoes and veggies to the pan. Pour in eggs. When the edges start to look crispy flip the tortilla. If you don’t want to flip, simply turn the pan upside down on a plate and slide the tortilla back into the pan. After three to four more minutes slice through the tortilla to see that it’s cooked all the way through. Eat and drizzle with (or drown in) enchilada sauce!

ps – Some may say I burned the eggs, but I like them that way!

Leave a Reply to Chung