Posted by saral on Jun 9, 2011 in Dips and Sauces from Around the World, How to Make Sauce, Sauce Recipes | 5 comments 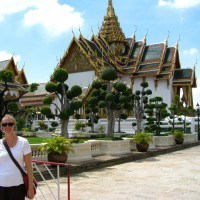 That’s me at the Grand Palace in Bangkok, Thailand. My husband and I traveled to Asia a couple years ago. Aside from seeing spectacular Buddhist temples, enduring incredible heat, and riding on elephants (it’s bumpy), we ate A LOT in Thailand.

It’s not only that food is cheap in Thailand. It’s that the food tastes as spectacular as those sparkly temples look.

While in Thailand my enjoyment of chicken curry (and Singha beer) went to a whole new level. Aside from the fantastic flavors, I loved that the meat stayed on the bone and that almost every dish included these tiny little eggplant that I’ve only seen in Thailand. I thought they were peas at first!

That’s me, in the class, sweating my tush off.

Since returning to the U.S. I’ve had some pretty awesome chicken curry, but I think it tastes better in Thailand…just cuz. That doesn’t stop me from making my own chicken curry, including a version of the coconut curry sauce recipe I found over on PickyEater.com. She served the sauce with vegetarian dosas, but I modified the recipe a bit and baked chicken in it.

Instructions: Heat olive oil in sauce pan and cook onions and garlic in pan until soft. Stir in all seasonings and vegetable broth. Then, slowly add coconut milk all the while stirring. Throw in tomatoes last and let the sauce simmer for 10 minutes or so to let flavors come together.

How to Bake Chicken in Coconut Curry Sauce

1. While the sauce is simmering, preheat the oven to 425 F and pound away at four chicken breasts with a meat tenderizer or a frying pan (I prefer the frying pan).

2. Once the breasts are nice and smooth, season them with salt and pepper and then place each breast in its own foil square.

3. Add veggies if you like. I put a few brocolli, cauliflower, and green pepper pieces in the foil bundle.

Not quite like Thailand, but I’ll still eat it!